Having a bespoke award commissioned is a great way to push your branding and ensure that it is consistent across everything you’re doing. Most events change theme every year and update their branding, staging, website and literature to reflect the theme, but often the awards themselves are neglected. 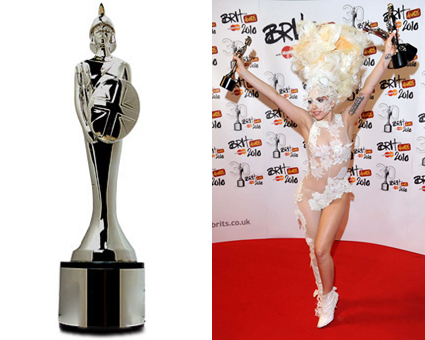 The Brit Awards are a great example of this. Up until 2011, the same awards were used each year regardless of the theme or changing branding. Although the award was a unique and iconic design, it didn’t necessarily reflect the cool, colourful and rebellious image of The Brits. 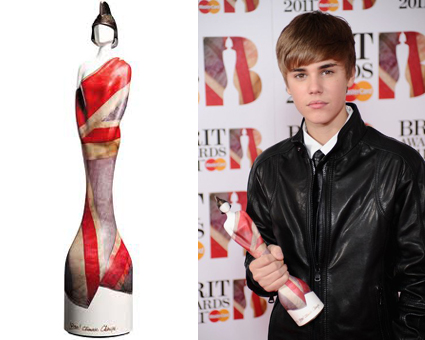 2011 was the first year that the design of the trophy changed to the modern form that we recognise today. The branding in 2011 changed to emphasise the British aspect of the event primarily using the draped union jack look. This was heavily reflected in the trophy, which was designed by Vivienne Westwood. The new Brits logo even featured a silhouette of the redesigned trophy. The new design had a massive impact and really catapulted The Brits from a big event to a huge global show.

Legendary pop artist Sir Peter Blake took on the trophy design in 2012 continuing with the British theme and Union Jack colours, but also introducing icons. This is carried right through the branding, television graphics, trophy design and even the stage set. The trophies once again captured the attention of the media and helped build up excitement prior to the event.

Speculation and hype began to build in 2013 as to who would design the trophy. It has now become as much a part of the event as the music itself. Damien Hurst became the third British creative to put his unique twist on the trophy. The 2013 spotty look was a big departure from the previous Union Jack branding, but by now the Brits branding has become so strong that it has become a blank canvas for whatever theme the organisers and artist decide to use.

Obviously not everyone has the financial spending power of The Brit Awards, but the same formula can be applied on a smaller scale. In fact, for smaller events it’s even more vital to take every opportunity to push your branding. Here are some examples we have been involved in recently:

As you can see, a visual concept carried through the entire event creates a very strong brand that has far more impact than using off-the-shelf and plain components. If you would like to find out more about how the team at Gaudio can create a bespoke award for your event, please call us on 01242 232 383 or visit www.gaudio-awards.com.